Flip through any vocal pedagogy text and you’ll see the diaphragm listed as one of the primary muscles of inspiration. It is the second largest muscle in the body. In those texts we learn about its function of assisting in respiration and that’s the end of the discussion.

In addition to playing a role in bringing air into the lungs, it also participates in moving food to the stomach (the esophagus passes through the diaphragm), it massages the vagus nerve which wraps around the esophagus, and it helps create stability in the abdomen.

Evolutionarily, the role of the diaphragm is as a stabilizer, not as a muscle of inspiration.

This is where things start to get interesting.

When you engage in a high load activity like running or planking, the diaphragm becomes a stabilizer and you therefore can’t breathe deeply because the big D has another job to do.

Because we need more air in cardiovascular exercise we will begin to use the accessory muscles of inhalation to help create the needed space in the body. In these instances, this is the body intelligently adapting to what is being asked of it. When you are done with the high load activity the accessory muscles will stop helping and the diaphragm is no longer needed as a stabilizer so it goes back to undulating like a jellyfish, playing a larger role in respiration.

When it comes to our emotional state, the diaphragm has a hugely important role.

We are constantly subconsciouly scanning our environment to determine safety. This is called neuroception. What muscle is highly responsive to a threat perceived through our neuroception? The diaphragm.

Whether we experience a stress response of fight, flight or freeze, the diaphragm will armor up (along with the psoas and pelvic floor) in response, reverting to its role as a stabilizer. In other words it will no longer undulate like a jellyfish.

A few heads may have just exploded, so take a second to re-read those last two paragraphs.

Can you think about a time you’ve been startled? Like, REALLY startled. You might be able to conjure up the sensation of the adrenaline that flows through the body, but can you somatically sense the grip of your inner core too?

When we are in a state where most of our life is without heavy stress and a history of trauma we might experience a stressful event, have some armoring up of our inner core and then as we move back out of the stress state the diaphragm, psoas and pelvic floor revert to their normal state.

Think now about people who have endured sustained trauma, a major traumatic event, or multiple traumatic events throughout their lifetime. Or people who live with regular anxiety or panic. Their diaphragm may be in a state of armoring on the regular and not know how to be any other way.

For these individuals, taking a deep breath won’t work. (in fact it might make them want to punch you in the face if you tell them to just take a deep breath and calm down). We cannot use the breath to move into a place of calm when our nervous system is disregulated in this way.

So what do we do? We can use movement, cultivating the skill of noticing without judgement and connecting to the environment around us to teach our nervous system a new sense of safety which will help the diaphragm move out of stabilizing and back into it’s role as a muscle of respiration.

If you read this and identify yourself in these words, reach out and let’s talk. Your body can find a state of safety and movement can play a major part in getting you there.

The Deal with the Diaphragm, Pt 2

In the first post we looked at the diaphragm and its role in inhalation – It is the primary muscle involved in the lifting of the ribs and the expansion of the abdomen upon inhalation. To be extra clear, it is always involved in breathing – there is no such thing as a non-diaphragmatic breath. It is just a matter of how efficiently it works. When you are a singer you need it to be very efficient, and how the body is positioned influences the way we use the other muscles of inhalation and exhalation all of which allows the diaphragm to function efficiently.

When we sing we need to slow down the rate at which air is expelled so it matches the needed amount to set the vocal folds in motion at the appropriate pitch and gives you the ability to sing through a phrase. We can’t do that with the diaphragm because we have no direct control over it.

We accomplish this by engaging the accessory muscles of exhalation. (When you aren’t singing you can slow the breath down by pursing the lips on exhale, hissing, or by using an ujjayi breath). The abdominal muscle that has the most direct relationship to the diaphragm is the transverse abdominus, the deepest layer of belly muscle, because it attaches to the body at many of the same points that the diaphragm does. We often refer to muscles in pairs as antagonists (think bicep and tricep in your arm). The transverse abdominus is the antagonist of the diaphragm. The other accessory muscles and their antagonists include the obliques (belly) and the costals (ribs), but we’re looking most closely at the transverse abdominus here. 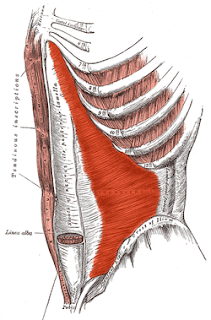 Transverse Abdominus in deep red above.

If the diaphragm returns to its resting position quickly, you get a big burst of air that will either make your sound breathy, out of tune or more difficult to create than it should be. So, when we slow its return down by engaging the other muscles of the abdomen and back, especially the transverse abdominus, you create what is often referred to as ‘support’.

So, how do you know you are engaging the transverse abdominus muscle?

Lie down in a well aligned manner. Place your hand just above your pubic bone on your low belly.

Exhale through pursed lips or on a hiss, continuing until you feel as though you are out of air. Like, really, really out of air.

While exhaling pay attention to where you feel muscle engagement – hopefully you feel it beneath your hand in the lowest part of your belly, almost as low as where the pubic bone is. It is a subtle in-and-up motion. That muscle engagement is the transverse abdominus muscle which wraps around the torso like a corset. If you aren’t sure if you engage it when you sing, try vocalizing on the sounds v, m, n, or the ng sound from the word sing with your fingers pressed into your softened belly. Those sounds are good triggers to engage the muscle and you’ll feel it press against your fingers when you vocalize. 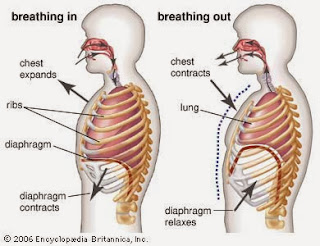 Singers, have you ever dealt with tongue tension o

I did something new today and took my first ever P

Singers! - Do you have any of these habits in your

A lil Wednesday Wisdom to start your morning. - I

Singers, your core stability matters to your voice

Took myself on a date this morning to @russellsgar

Saturday morning Jammie flow… - This is the morn

Singers - do you have good core stability? When y

Singers! What to do about forward head posture? -

Do you vary the ways you position your body while

It took me a while to come to this, but my guiding

Singers, is this cycle familiar to you? - You've

It’s time to get into the body! - Join me for mo

Starting the new year with joy means moving my bod

Dealing with a voice disorder? Check out this upco

It's time to power down: take a break from the soc